Do you have a sneaky visitor? Find out with a PIR sensor!

Do you have a sneaky visitor? Find out with a PIR sensor! 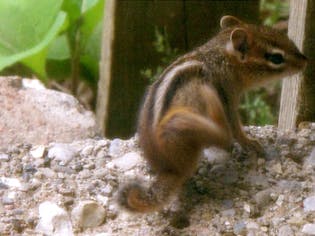 This project uses a PIR (passive infrared) motion sensor. It detects motion when Porchy the Chipmunk sallies forth onto Sally's porch.

Let's say this little dude lived under your back porch:

Cute, right? Wouldn't you want to know any time he's outside doing cute stuff? Me too! This is a simple project that serves as a good framework for — let's face it — more practical projects. The high level idea is:

Sensor data on one Scout triggers an action on another Scout. That data is graphed on a web page. And it's all wireless!

I used 2 Field Scouts, and 1 Lead Scout to bridge the project to the Web, though I could've easily done it with just a Starter Kit — 1 Field Scout, 1 Lead Scout.

There's the initial working prototype. You see that Field Scout 1 is plugged into USB for power. At the time I only had a 5V PIR, and Pinoccio is natively 3.3V. I ordered a 3.3V friendly PIR so now this project is all wireless.

Below you can see my Pinoccio HQ dashboard spitting out an alert every time there's a chipmunk. This is a quick and easy way to debug and make sure your sensor data is coming through. As I make code tweaks, I don't have to click "Upload" and wait for things to compile. Working with HQ gives me immediate feedback on hardware and really speeds up prototyping.

I made a janky enclosure out of a plastic Bento box — I mean, it's Hack Day after all. Some day, this could be 3D printed and beautiful!

Here's the code that I loaded onto each Scout using ScoutScript, typed directly into the Console on HQ:

With my Piezo plugged into D5, I went to HQ > Pin settings, and set D5 to Output. Then I plopped this into the HQ Console:

Lead Scout - Bridge to the Web

No code necessary on the Lead Scout! What amazes me is, you're doing mesh networking without having to know or care what the heck a "mesh network" is.

I'd like to receive Twilio-based SMS notifications on my phone when there is an active chipmunk. This should be pretty straight-forward. Once that's working, I'd like to hook all of this up so I see alerts on my Pebble watch.

1 project • 2 followers
I'm the CEO of @goPinoccio, a cartoonist, and an advocate for livable cities.
ContactContact