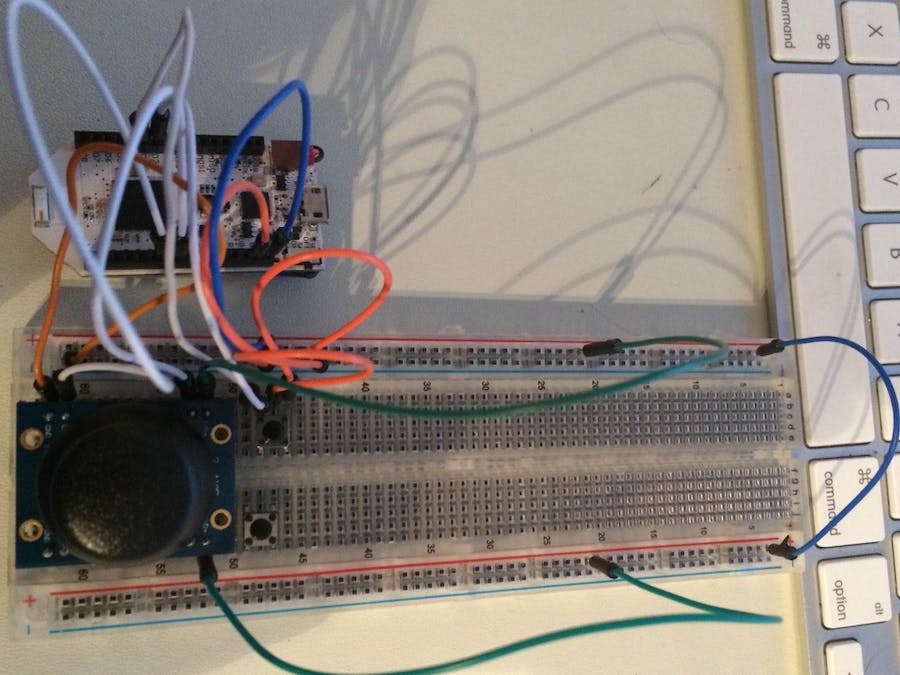 Control you Mac computer the Pinoccio, a joystick and 2 push buttons, all with the power of Javascript. I know right, Javascript!

Here is what the final product will look like.

Wiring Up The Board

First we set up the initial layout of the board, we have the joystick at the bottom, with a pinhole left over on each side. Then we have two push buttons representing the two buttons on a normal mouse. We have the buttons staggered so we can read the value independently.

Third we're going to wire up the joystick. It is a little bit difficult to see where the wires should go, but I'm sure you'll get it sooner or later, take your time. We connect the pin on the joystick that reads "GND" to ground. Then we connect the two pins that read "L/R+" and "U/D+" to power which then runs to pin "3V3" on the Pinoccio scout.

That's it for wiring!!

The code for the mouse is written in Node.js using Johnny-Five. So we're gonna start up our terminal, and run a few commands to get out project running.

To startup our project. Go through all the steps to getting our initial project started. For this project we're using three Node Packages:

So let's get going to install these packages. We need to run:

Now that we have these packages installed we can get into programming with Javascript. First off we need to create our index.js file, so since we're in the terminal already let's just run:

Now open up the newly created index.js in your favorite text editor, I prefer Sublime Text, but it's up to you. At the top of  index.js we're gonna require our three packages that we installed earlier.We also need to install a NodeObjC framework called Cocoa to manipulate the mouse cursor on our Mac.

Ok so now that we have that going let's initialize our Pinoccio board, and also initialize some global variables

Next we're gonna start the board and reading the values from the push buttons and the joystick.